You're not the victim Larry! 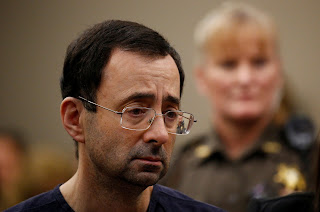 Former USA Gymnastics’ doctor, Larry Nassar, has been sentenced to 175 years in prison for his sexual misbehavior with young girls. The judge allowed 156 women and girls to address him directly regarding his misbehavior. Their emotional testimony was broadcast live. Following his sentencing, Nassar addressed his accusers. He said, “Your words have had a significant emotional effect to myself and shaken me to my core. ... an acceptable apology to all of you is impossible to write or say.”

Really? Their words had a significant emotional effect that shook you to your core? What kind of effect do you suppose your predatory sexual behavior had on the women and girls you told this to?

You’re right about one thing. An acceptable apology is impossible, but how about giving it a try. Or does the impossibility you’re talking about lie in your inability and/or unwillingness to even take the responsibility that any decent human being would take when causing harm to another by saying, “I’m sorry.”

Your entire statement is an confirmation that Judge Aquillina gave you the sentence you deserved. You’re obviously a man who doesn’t get it. Well, Larry Nassar, you’ve just been put on notice that’s an excuse that men no longer get to hide behind.