52 Ancestors in 52 Weeks:  Surprise
Week 6:What is something surprising you've found in your research? What is a surprise that one of your ancestor's had? Have you found something in a surprising place?

"Hey, Dad, no sisters, huh?" my grandfather's six children, including my own father, would teasingly ask him.

Grandpa was a man of few words. He would simply give his inquisitors a closed mouth smile and then remind them, "You have five wonderful uncles."

Grandpa died in 1973, almost a decade before Dad began building our family history. I don't know what year the surprise fell into his lap: Grandpa did have a sister, after all. Dad’s source for his entry about her was the Marquette County Courthouse, June 26, 1997. He entered the barest details about her. Perhaps because she had been a family secret, he didn't want to dishonor his father by digging more deeply. Or, perhaps, there was no one left to answer the questions he had.

So, when the family history was turned over to me, I looked for more information. There is no intent here to dishonor my grandfather; my intent is to honor my great aunt, Agnes Mary Maloney, by telling her story.

Agnes, who was born in 1884, had a child "out of wedlock" on May 4, 1910, when she was 25. She named her daughter Cecilia Margaret. Following Cecilia's birth, Agnes went to work as a housekeeper and lived at home with her parents. A year-and-a-half later, at age 27, she was dead. Although her obituary mentions she had many friends, it's difficult to know how their friendship might have changed after Cecelia was born.

Her death certificate said she died of organic heart disease, which can be caused by an underlying illness, including things like myocardial infarction or other organ dysfunction, like thyroid disease. Or perhaps the underlying cause was due to a broken heart or the stress of being a single mother during a time when women were harshly judged for it, unless they had been widowed. Despite supportive parents, Agnes may have experienced being socially outcast by her friends and in her community.

Muriel K., Cecilia's youngest daughter, shared these details about Agnes (her grandmother) that came from her mother, as well as her own speculations as a genealogist:

It must have been a very difficult time in Agnes’ life. I’ve wondered if having a child out of wedlock may have contributed to her death. I have a copy of Agnes’ obituary and there is no mention of her having a daughter. It does mention that she had many friends, but had been ill and housebound for over a year. I have a copy of my mother’s baptismal record, and it lists Agnes as her mother, but no father is listed.

In 1910, Agnes was living at home with her parents and brothers. The census was taken in mid-April, just a few weeks before Cecelia's birth:

I assume my mother, as an infant, was living there when her mother died in November 1911. According to a transcript of the St. John’s Church records, there is a notation in the margin next to Agnes’ death record that she was from Duluth [Minnesota]. I have a hunch that, while pregnant, she went and stayed with her older brother, John. I think she would have likely traveled by train.  John and his wife, Anna, named their first child Agnes. She was born in October, 1911, five months after my mother. John and my grandmother, Agnes, were only 18 months apart in age. I believe they were probably very close and perhaps he named his daughter after her in an effort to show love and support.

Following Agnes' death, her parents, Dennis and Mary Lynch Maloney agreed to raise their granddaughter, Cecilia. Their own hearts must have been broken. Agnes was their second child to predecease them. Their third child and second son, born in November 1888, died in March 1891 when he was only two.

Dennis and Mary left Ishpeming sometime after 1910 and before 1920 to live with their son, John, and his family in Keewatin, Minnesota. They may have left in 1916, after their youngest son, Robert, was married in Michigan. In the 1920 census, Dennis is shown living with John, but there is no sign of Mary or Cecilia. It turns out that Mary died September 23, 1918 at John's home.

Shortly after Mary's death, Dennis realized he could not raise Cecilia alone. Either he did not want to impose on his son to take her in or, perhaps, John couldn't or wouldn't do it. Cecilia was sent back to Michigan where she was placed in Holy Family Orphanage in Marquette.

Frederick Eis, a bishop from the Marquette Catholic Diocese, called for that orphanage's construction in the early 1900s, when the two other orphanages in the Upper Peninsula had no room for more orphans. By the time it was completed, in 1915, building costs had reached $120,000, a phenomenal amount of money at that time. Eventually, the diocese's high investment paid off when Holy Family became the region’s biggest orphanage, which housed as many as 200 children at once. 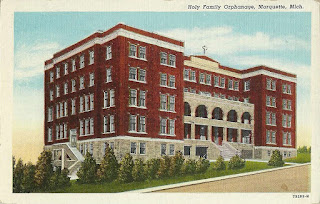 However, it wasn't long after it opened that it gained a contemptible reputation. In her book Ghosts of Michigan's Upper Peninsula (Arcadia Publishing, 2018) Jennifer Bullock wrote this about Holy Family in her chapter titled A Tortured   Orphanage: The Story of Marquette’s Holy Family Orphanage:

"When the orphanage was fully up and running, stories would leak out of children suffering at the hands of the nuns. It was a tough life, sure, with days filled by church, class and chores. But underneath the workaday existence was something much more sinister. Former children of the orphanage, once grown and moved out, often refused to speak of their time there, save to say that the nuns were cruel and inflicted unsettling punishments on the children. They heard of other children in the orphanage being beaten to death or left out in the cold Michigan winters."

Most likely, Cecilia entered Holy Family at about the age of eight, shortly after her grandmother died. She shows up at the orphanage in the 1920 census when she is nine. Her cousins, Marjorie and Dorothy, ages four and three are also there. Their mother had died at the Morgan Heights Tuberculosis Sanatorium in October 1919, three months after being admitted. However, their father, Martin, another of Dennis' sons, was still alive and also living with his brother John in Hibbing, too.

Here's what Muriel said about Cecilia's experience at Holy Family:

I realize now it was probably not a time in her life she wanted to remember. She did tell me a few stories about how they would go to Mass every morning and about working in the laundry. She told me that, for punishment, the girls were put on washing detail for feminine hygiene cloths. A necessity, but I can only imagine it as a most abhorrent task, and with no rubber gloves either. I’m not sure she ever received that punishment; probably the threat of it was enough for most children. My mother was always soft spoken and a rule follower, but maybe it didn’t take much of a transgression.

I visited the abandoned and boarded up building that was once the Holy Family Orphanage when I was in Marquette in 1998. My father-in-law found a loose brick for me and I have a pine cone from the site.

Muriel learned that Holy Family did not keep orphans beyond the ages of 12 or 13. That's when they sought members of the family to take them or put them into foster care.

I wrote to inquire about Holy Family Orphanage’s record for my mother. They said Dennis had adopted her out of the orphanage when she was 13.  I have seen letters that Dennis had written to her while she was in the orphanage. He always referred to himself as “Dad”. Unfortunately, I don’t know the whereabouts of those letters now.

Cecilia returned to Minnesota with her grandfather where she lived with him at her Uncle John’s home until she graduated from Hibbing High School in 1929. Muriel says, The story is that after she graduated, Grandpa Dennis sent her to Duluth to a business college. My sister Clarice had heard that Agnes once attended the same business college. My mother worked in the cafeteria and I believe my dad did too. That’s where they met.


That business college was likely Duluth Business University, which was founded in 1891, so it wouldn’t be unusual if Agnes had attended the privately owned and operated school. It focused on career-specific training. My own father completed a two-year business program there after returning from World War II in 1945.

I don’t know if Cecilia finished her course of study. She married Dallas Alee, that boy she met in the cafeteria, on February 3, 1931. Their first child, LaVurne Dale, was born in November 1931, but only lived a couple of weeks. Dallas and Cecilia had eight more children and eventually ended up on the West Coast.

However, they were still in the Midwest when Dennis died in Michigan in 1941. He had returned to Ishpeming about 1935. His obituary noted, "He leaves his five sons and a daughter." That, along with all the other things Dennis did for Cecilia, confirms he really did think of himself as her dad.

Only a few years after my father was surprised his father did indeed have a sister, Dad got another surprise—a call from one of Cecilia’s children. Cecilia had died in 1972 at the age of 62. Some of her family wanted to reconnect with their mom’s family from the Midwest. Our reconnection has and continues to enrich our shared family history.

When I set out to write this piece, it was to tell Agnes Mary Maloney’s story to honor her. Unfortunately, she didn’t live long enough to see how the story ended. But the life of her daughter, Cecilia Margaret, and Cecilia's family, created a strong branch in the Maloney family tree, which grew from the bud of Agnes Mary’s life and continues to honor her.