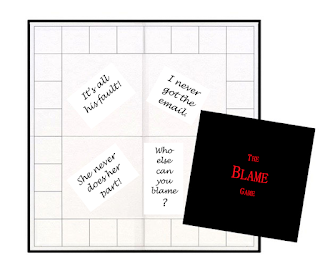 Do you like to play games? I do. Board games, card games, outdoor games, and party games. There's one game that I used to play all the time, but I don't like to play it anymore. It's called the Blame Game. Have you ever played it? You can play it by yourself or with others. The object of the game is to blame others. Winners are the ones who find enough people to blame for their misery and feel the best about themselves when they're done. For me, the problem with the game was that it was never-ending. When I ran out of others to blame, I would blame myself. No matter who or what I blamed, it never did make me feel better. As far as I can tell, no one has ever won the blame game.

Anne Wilson Schaef wrote: "Part of our problem with blame is that we often use it as an endpoint when it should, in fact, exist only at the very beginning of a process, if at all."

Hmmm, what if blame didn't exist at all? What would that look like? What would it feel like? I read this in a daily reader:

"Suppose, just suppose, we were resolved to follow this one idea: 'Let's stop throwing blame around.' Then, this one idea could be explored, meditated on, acted upon—until the end of our days. What would happen if we stopped blaming anyone for anything? We would experience miracles of tolerance and grace—rich spiritual rewards, reflected in a life of fulfillment."

Wow! Miracles of tolerance and grace. Can you imagine? I'm sold. It’s true. No one ever won The Blame Game, but all who have quit playing it are winners.

If you still play and are finding it difficult to quit, consider this advice from motivational speaker Eric Thomas, who said: "Stop the blame game. Stop! Stop looking out the window and look in the mirror!" Today I wish you a lifetime of blame-free living filled with tolerance and grace.